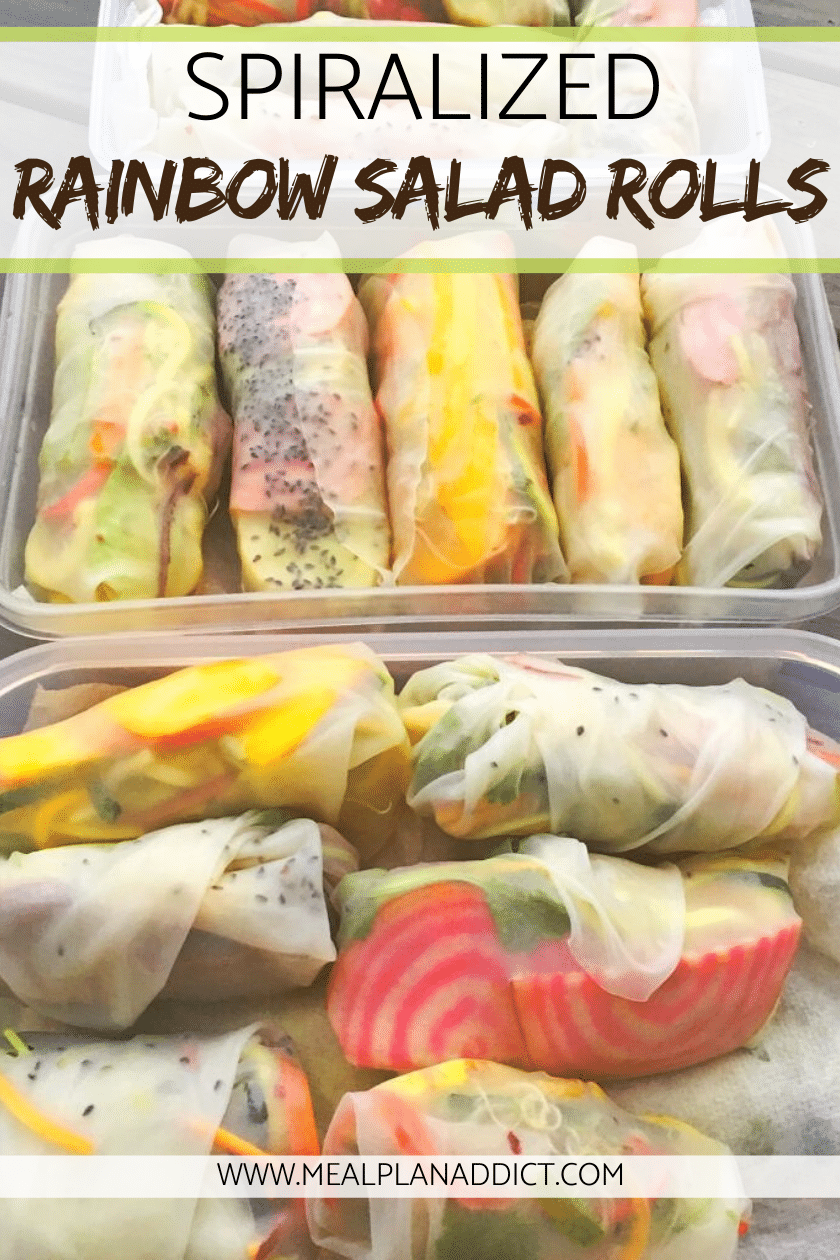 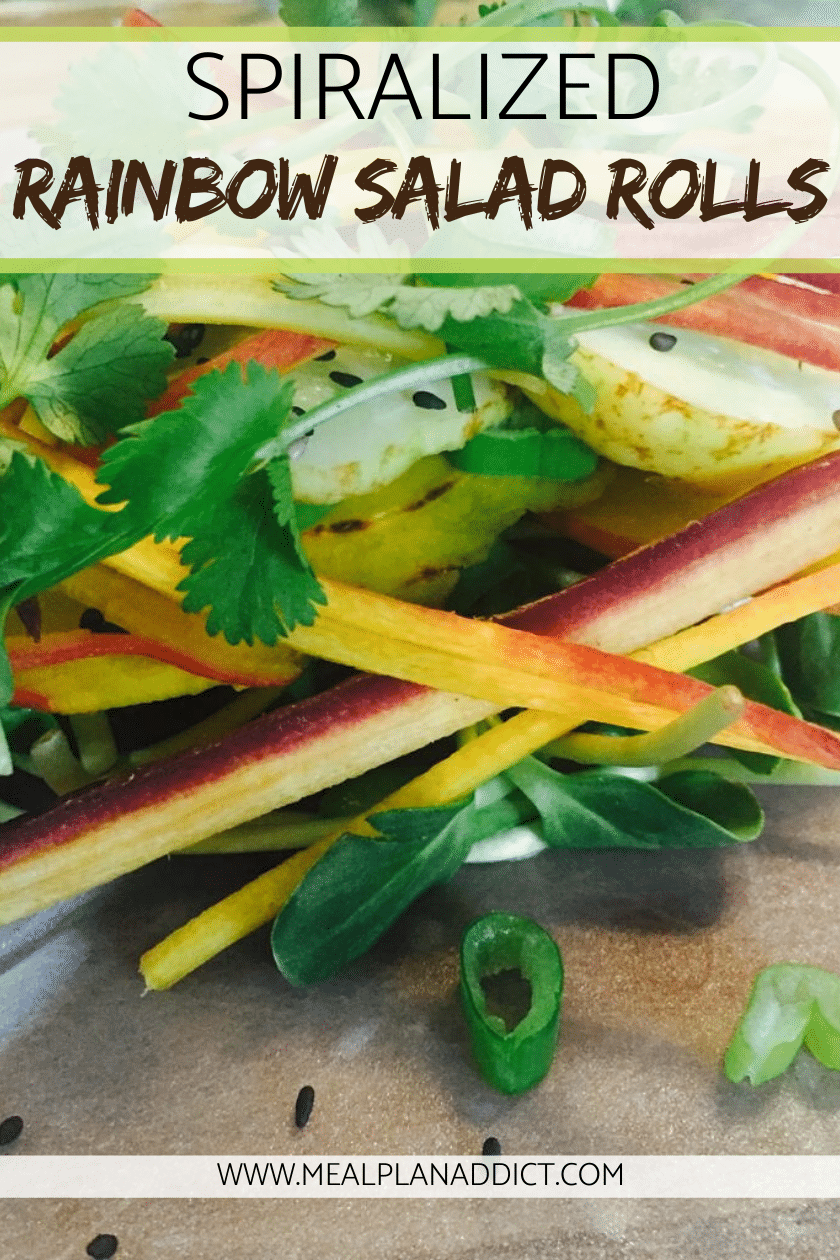 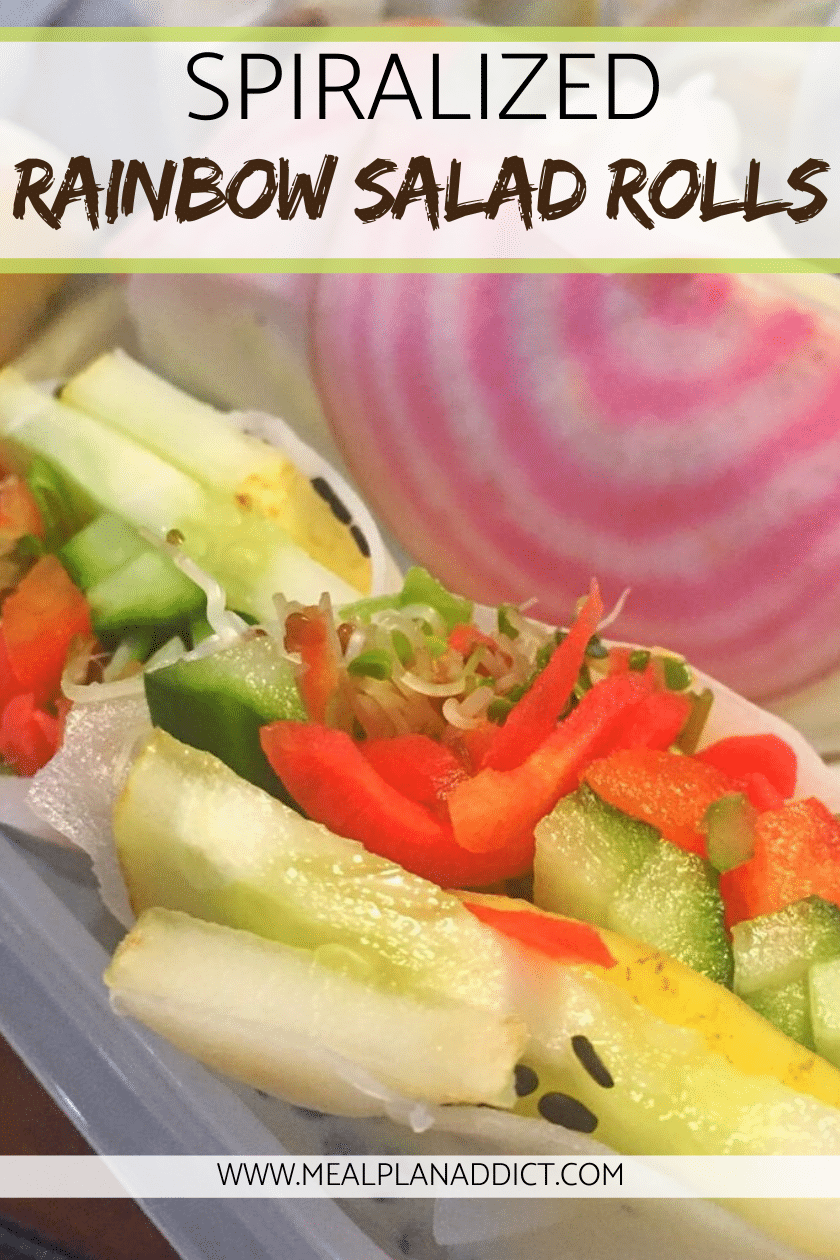 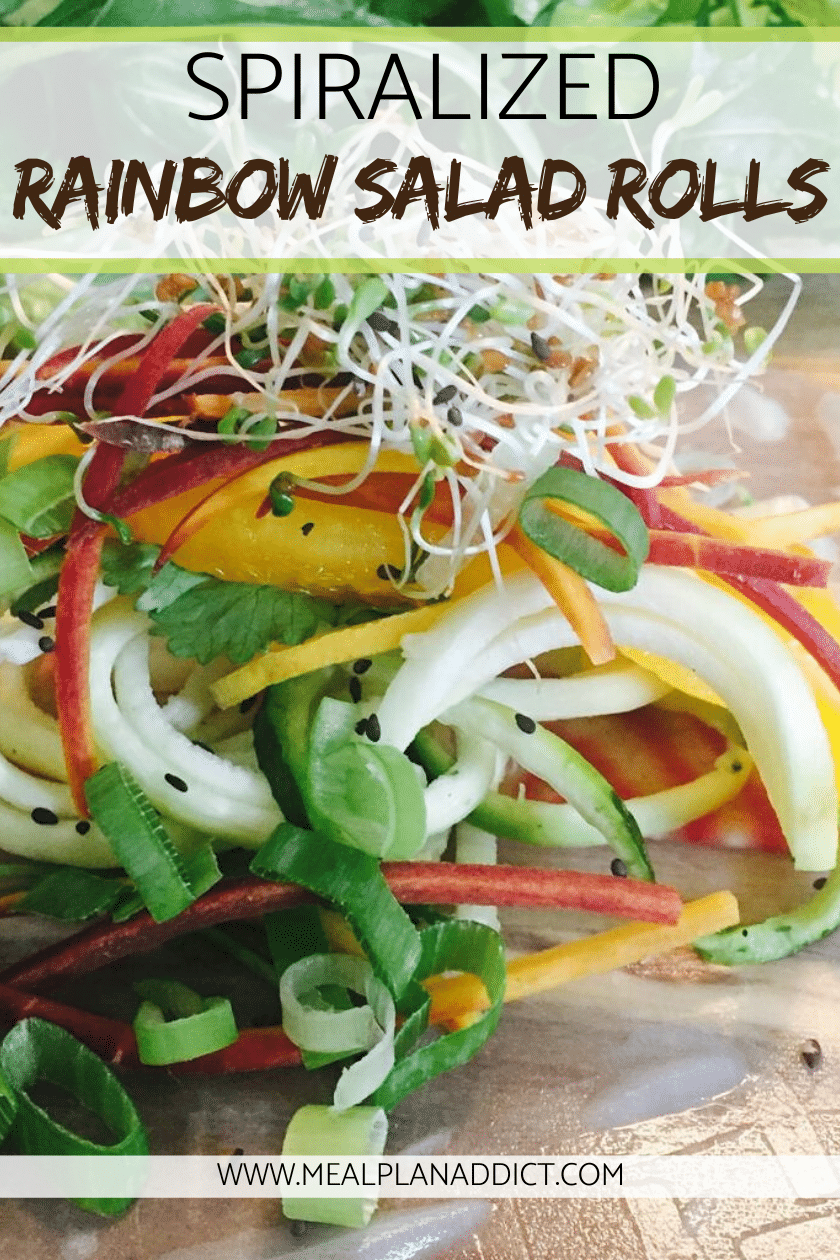 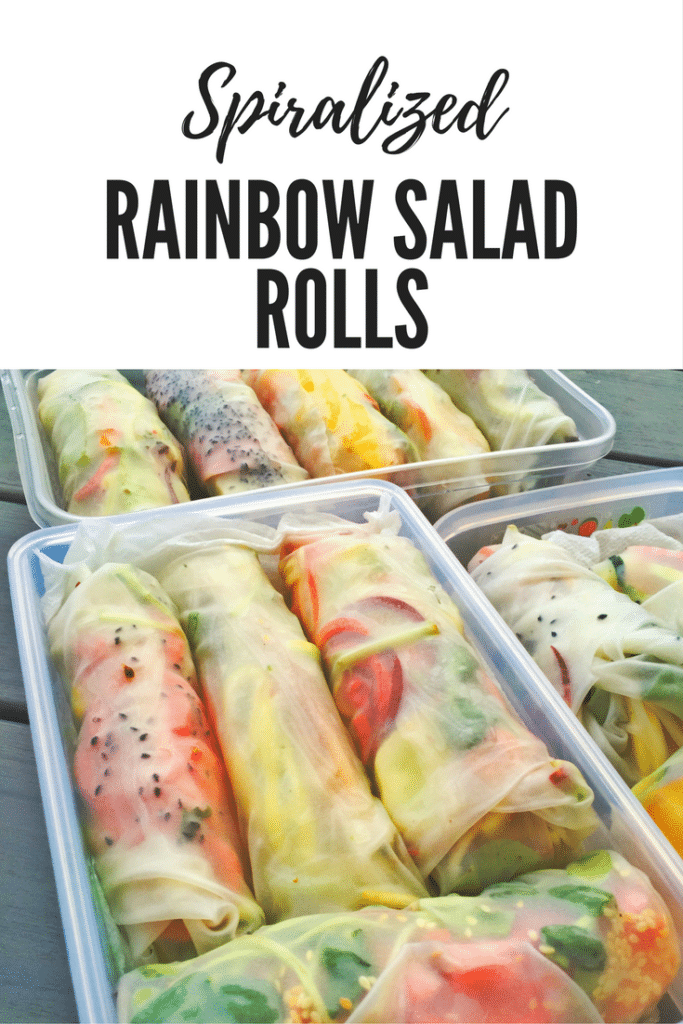 I don’t know what you call a badass Saturday night, but while I really focus to get my health goals back on track after the most amazing summer EVER, my Saturday night included a girls only chop and roll extravaganza.

I have been making salad rolls for a while now and my spin besties wanted in on it. So, when our husbands took off fishing we decided to pool our produce and turn it into little rolls of edible rainbows. Did I just say we “pooled our produce”… on a Saturday night…. Wow… not sure when I became this cool. Sigh….

Both spin besties left saying they couldn’t believe how easy it was – so if you are intimidated to try this – don’t be!

I will share with you what we did for our salad rolls, but rest assured, you can put pretty much any vegetable in these bad boys – and we did. Once all of the produce is prepped, it is just mix and match to your little heart’s desire with the contents. Of the nearly 30 rolls we made, I don’t think any of them were identical. 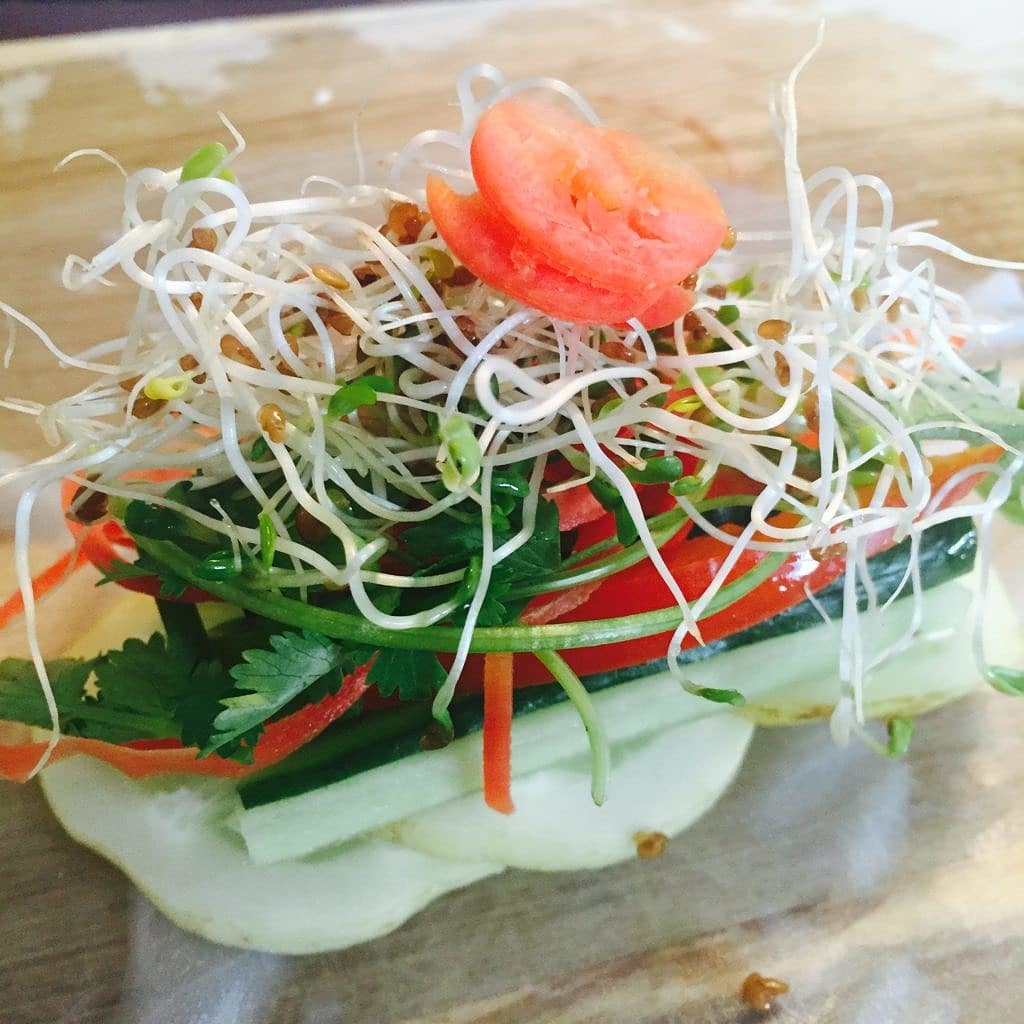 We all raided our fridges and then just threw down which ever veggies we had. I did just go to the local farmers market and so I had some interesting stuff… like this lemon cucumber. I think it is my official hobby to locate and try “new to me” produce, so of course I bought it. For the record, when you cut this open it looks mostly like a lemon, but it tastes EXACTLY like a regular cucumber. Interesting. 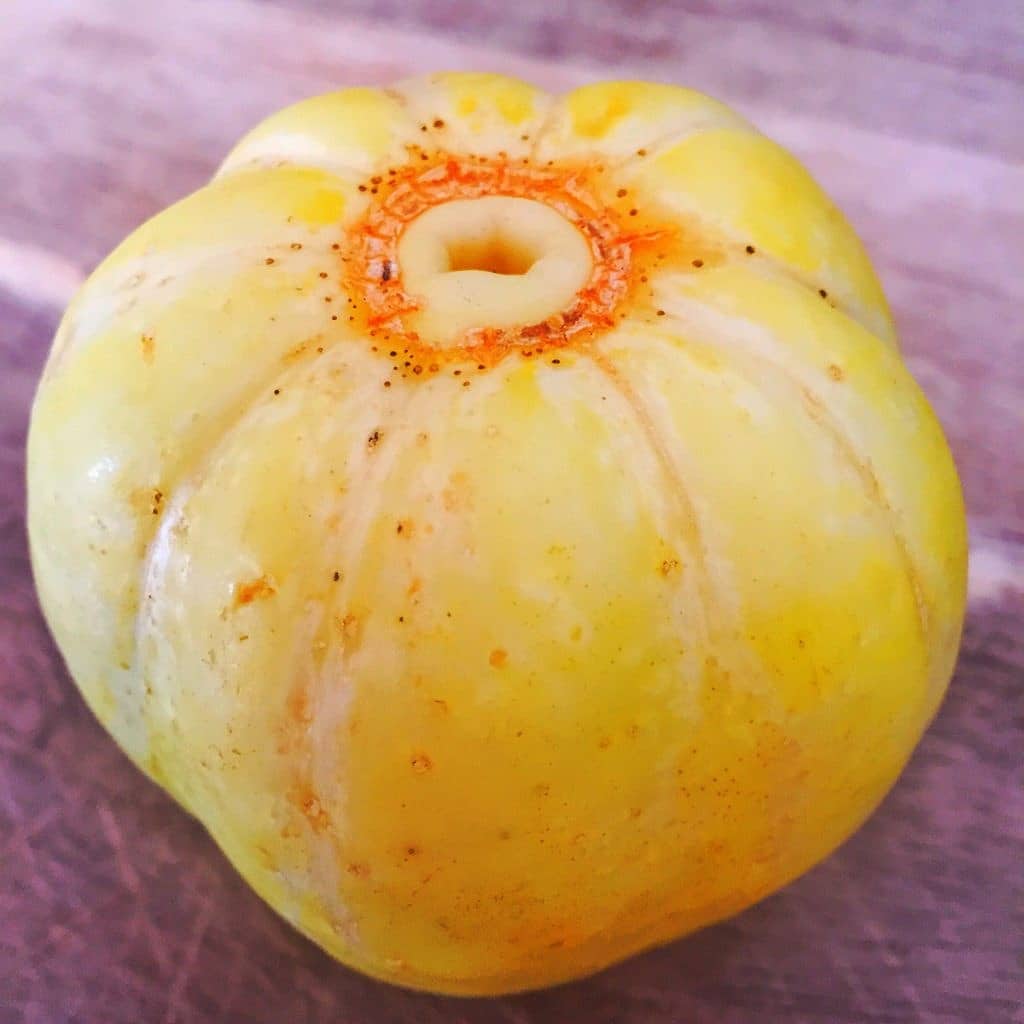 So, here is how you can make some super crunchy, delicious, Rainbow Salad Rolls:

For our salad roll adventure, we had an interesting list to work with: 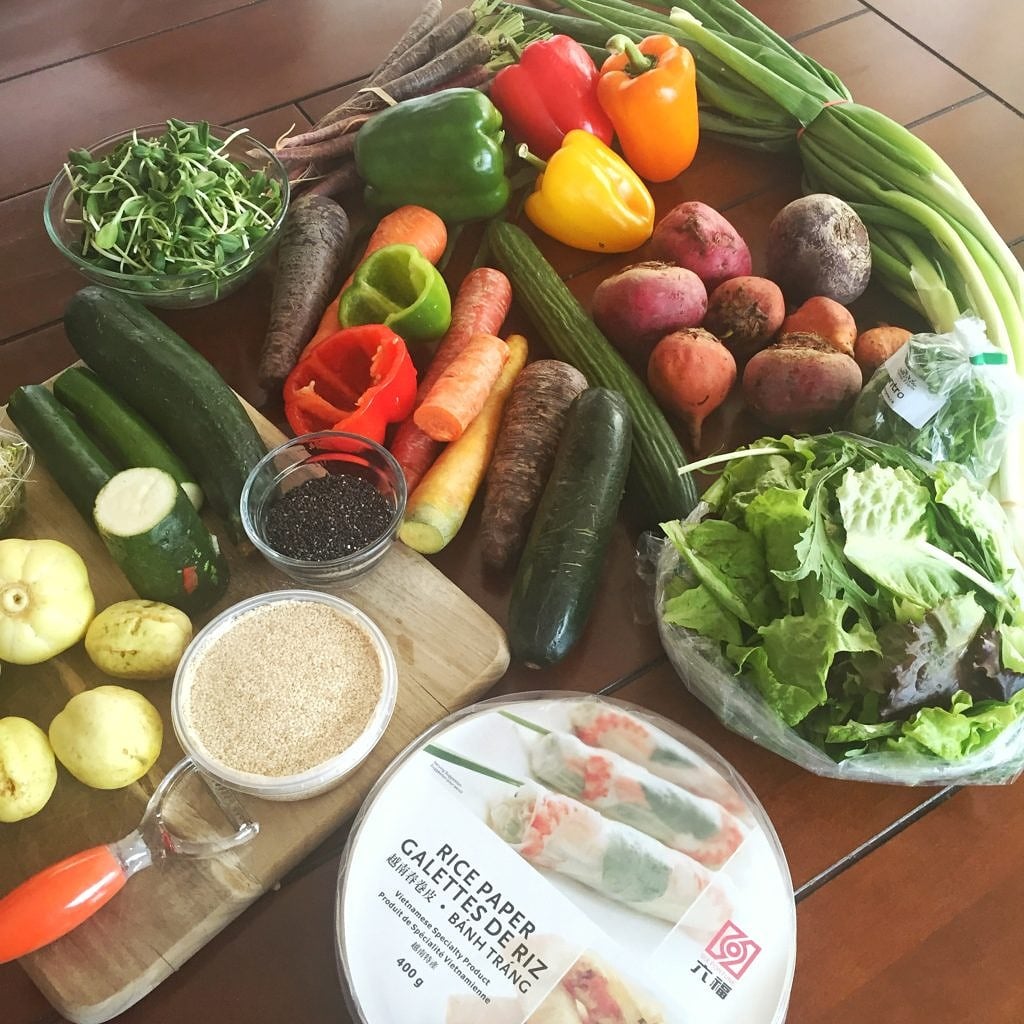 There are many ways to get to the most perfectly beautiful salad roll, and I have mastered none of them – but I sure do try! 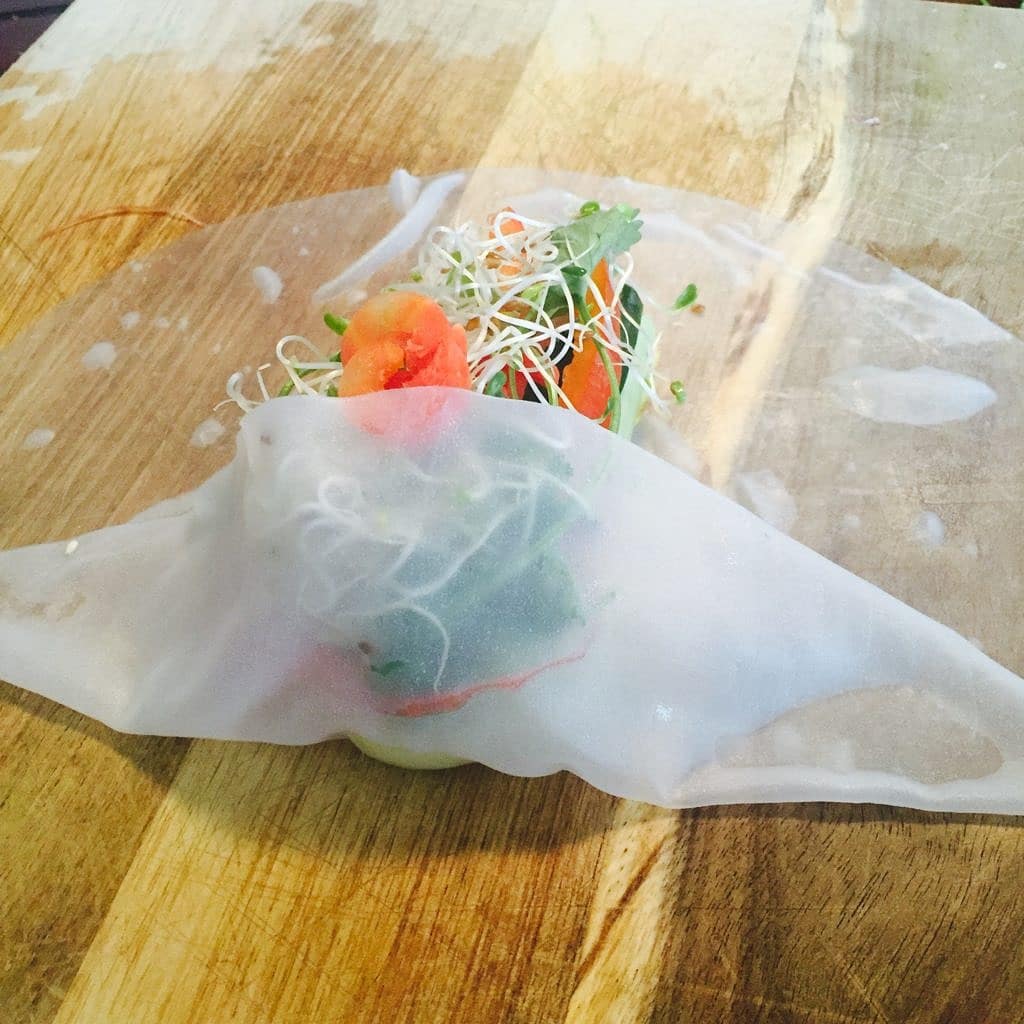 There isn’t really a great way to explain a “how to” for these. It is just practice and figuring out how much veggie filling should go in.

You will over fill them, they will rip and you will swear. It’s a proven salad roll making fact.

To get our rice paper workable, we had a shallow square baking dish filled with hot, but not boiling water. After a few rolls, we would change the water out to new fresh hot water.

Place the rice paper into the water for about a minute. Too long, and the paper will just fall apart, and not long enough, and the paper is too rigid to work with. Again, practice and I promise it is not as hard as it seems.

The bottom layer is the layer that is most visible so make it the pretty layer! 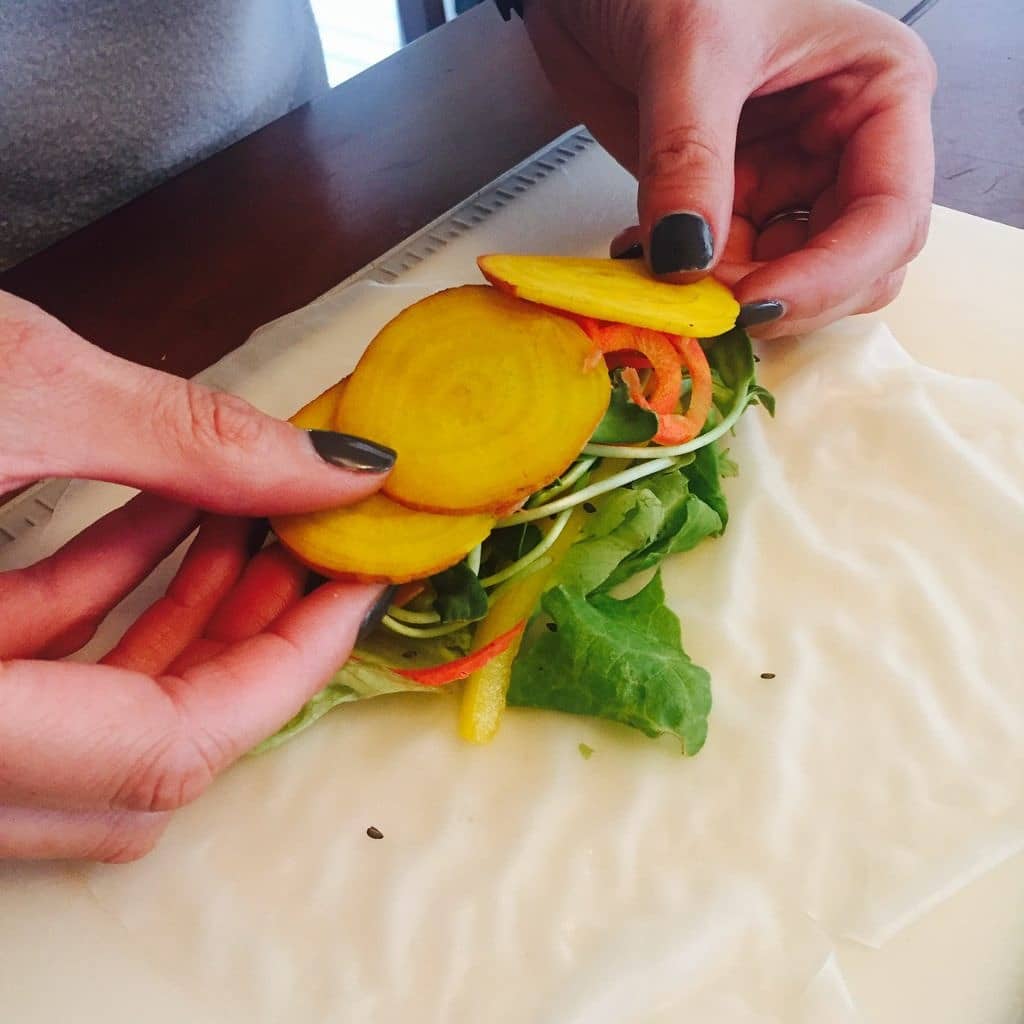 Play with the different combination of ways to fold your wrap until you find what works for you. 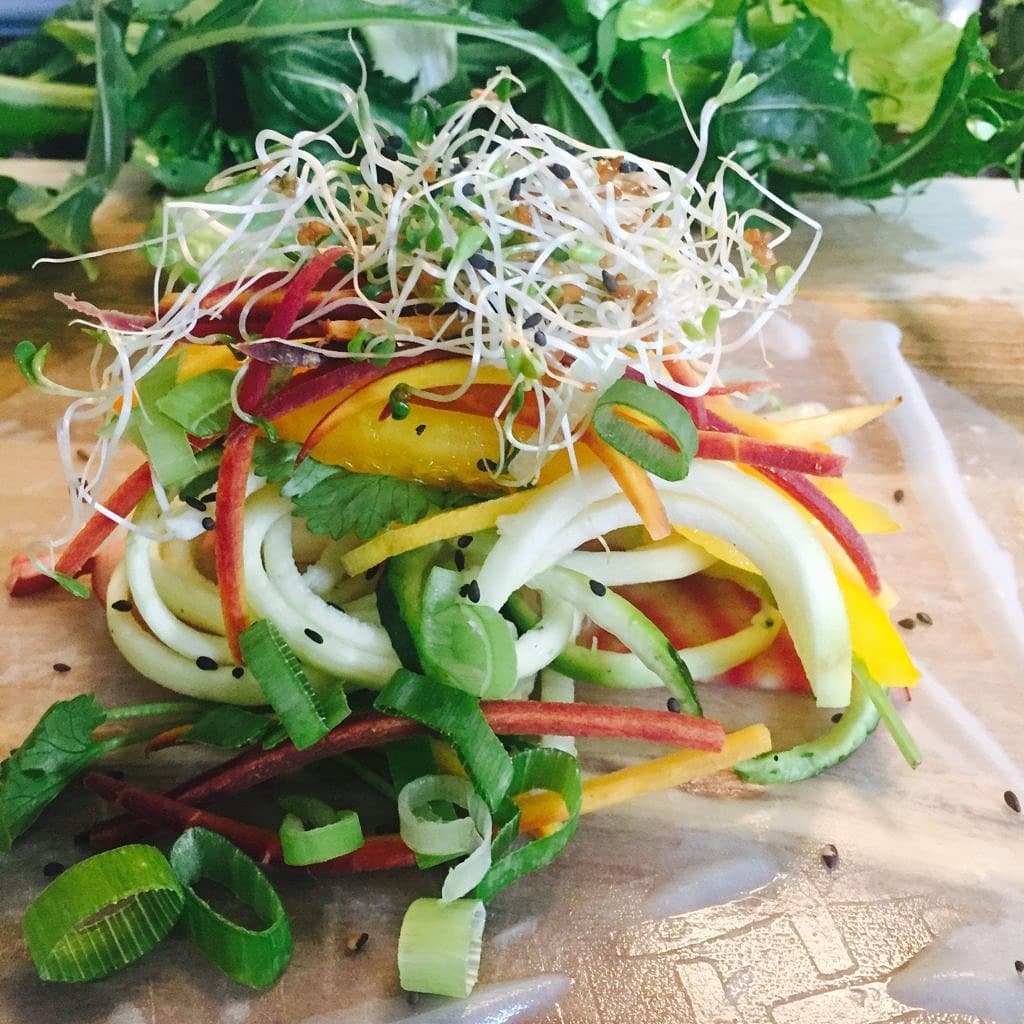 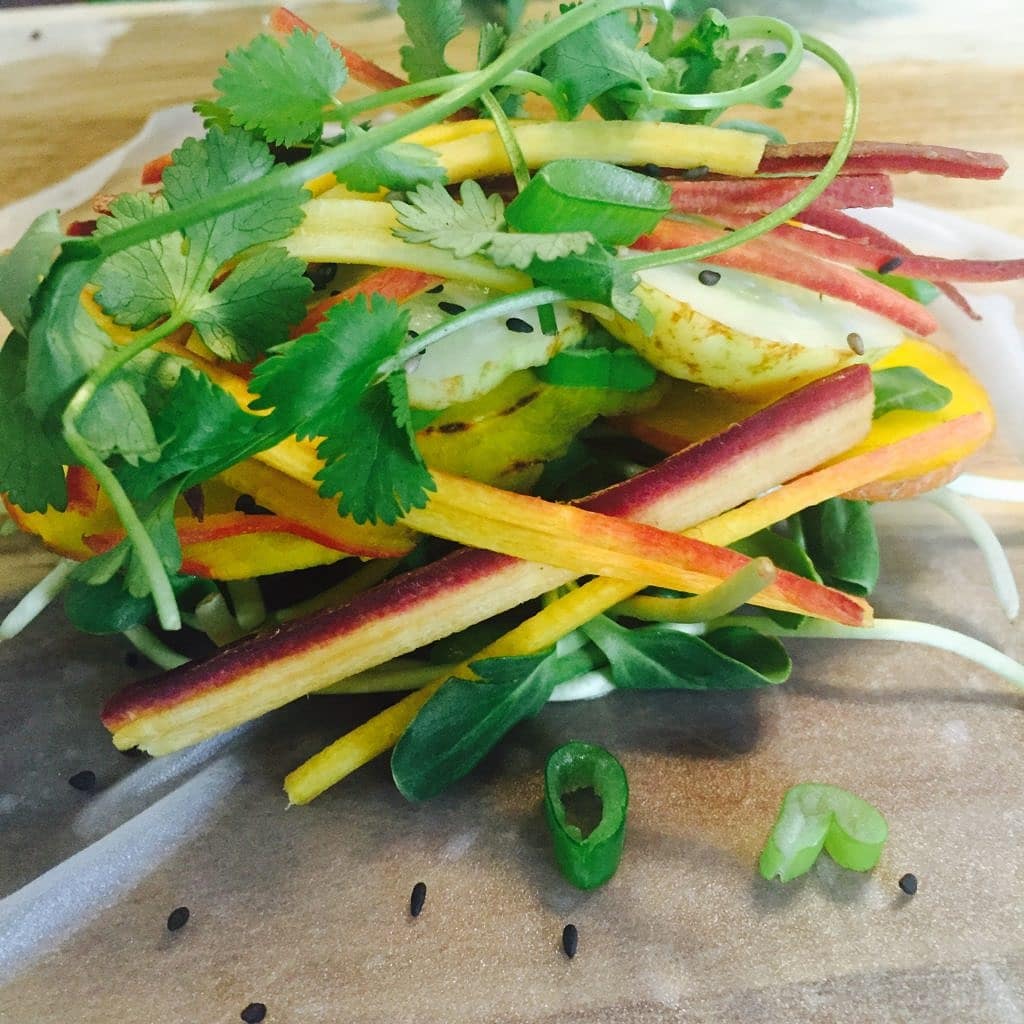 I will admit these are not the best make ahead snacks, but it is doable. I eat these up to 3 days after they have been made but do notice they do slowly dry out and some of them will rip if you don’t eat them the day you make them. FYI- ripped rolls taste just as good.

I lay a damp paper towel underneath the rolls, and separate each layer of rolls with another paper towel. I then change out the paper towel each day. Yes, these are a bit more high maintenance but they are better than a boring salad! 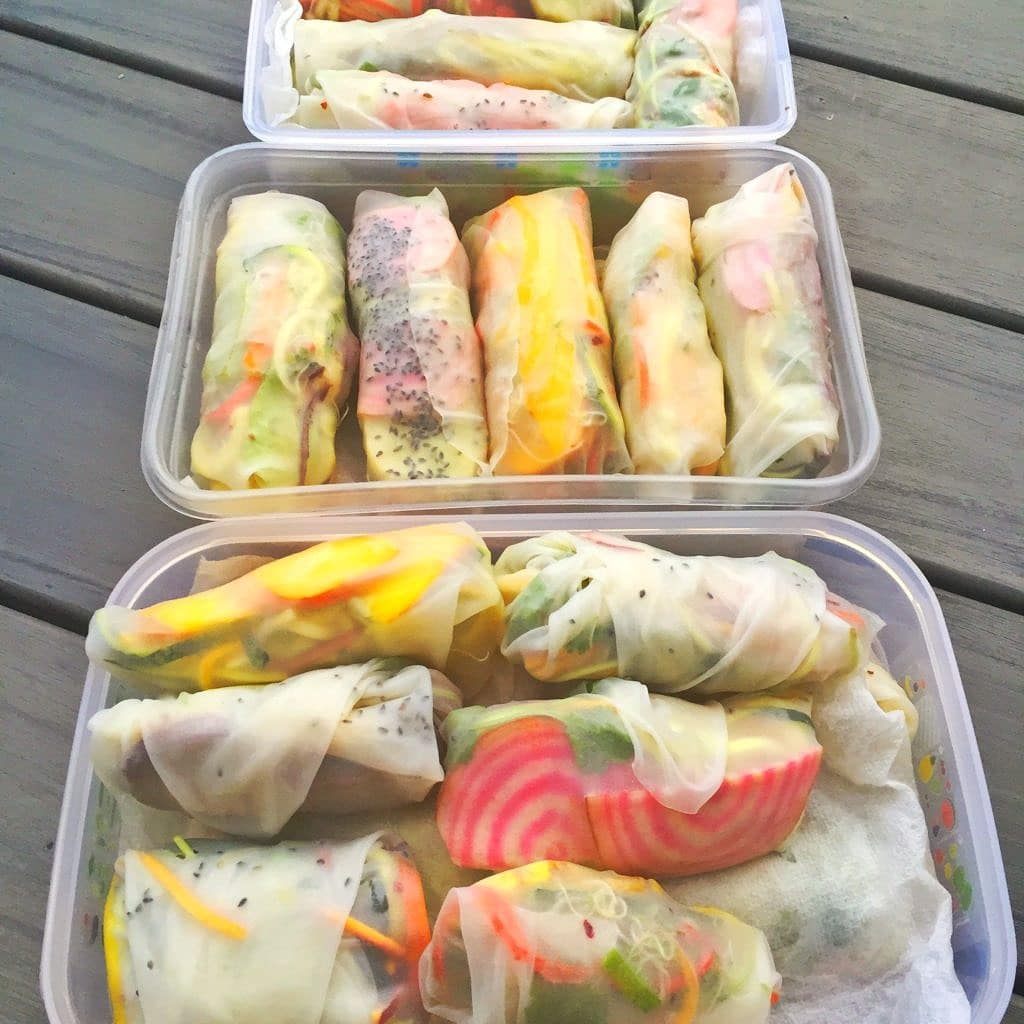 These are best served with a sauce and my go to is the peanut sauce from my Thai Slaw Mason Jar Salad post! But note that dressing is for a single serve salad, you will want to make more than a single serving! This sauce is lick off the spoon delicious. 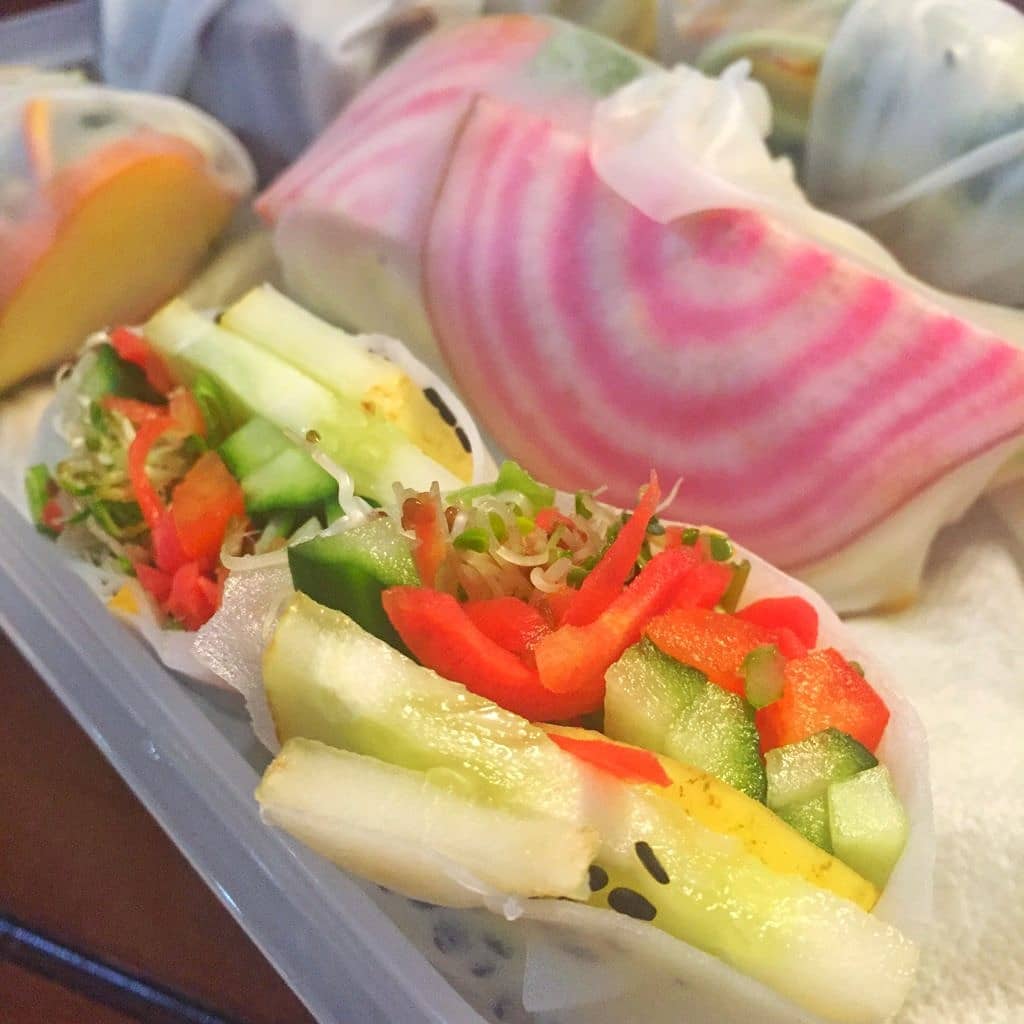 So, there you have it. Another way to make vegetables a whole lot less boring… but with a whole lot more swearing! 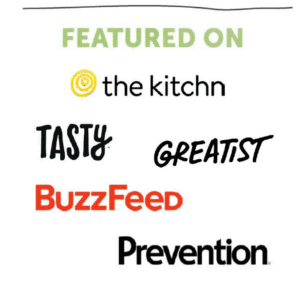